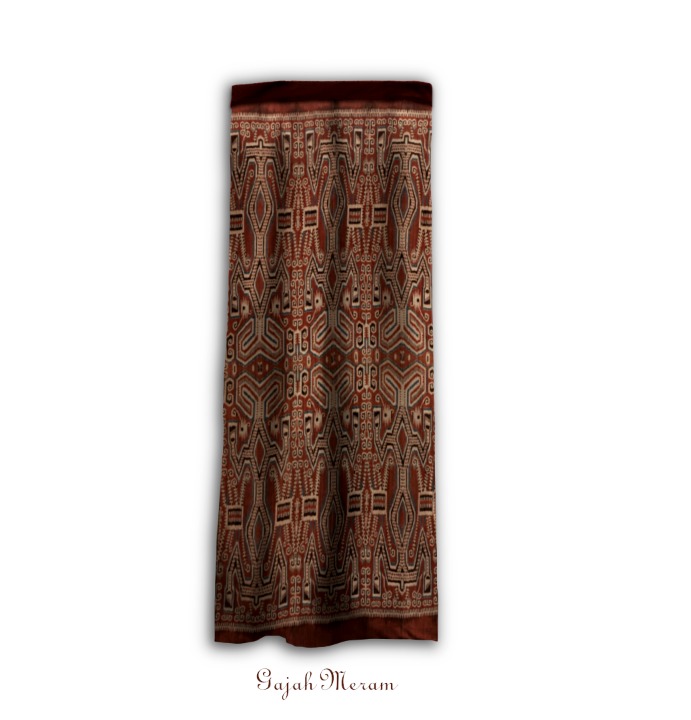 When an Iban weaver has distinguished herself by weaving animal forms, her next ambition is to weave the ultimate: spirit representations. This is when she enters the final state of her maturation as a weaver with the technical skill not only to create fearsome images of creatures of the mind on cloth—but above all to capture such spirits, subdue them, and imprison them in a ritual blanket, thus imbuing the textile with great spiritual potency.

As she has never actually seen the mythological spirits recalled in oral literature and wisdom, the only way she can be inspired to create them on cloth is through dream encounters. One such spirit figure is the Gajah Meram, or Brooding Giant.

Gajah translates as "elephant," but in esoteric language it means a creature of gigantic proportions. Another form of the term is gajai, which has the same meaning. In the Baleh, the Gajah Meram is given a supersized rendering, taking up the entire central design of a cloth. Margaret Linggi gives a Baleh version of the praise-name of the Gajah Meram as "Gajah meram nyawa dederam merembam tansang" or "The brooding giant growls in its nest," and intimates that the hidden meaning "symbolizes a warrior who, upon taking an enemies head, stays put, guarding his precious trophy head."

[1] The cloth that Linggi refers to depicts the torso of the giant with a stylized head of two Mayau Tindok (Sleeping Cat) motifs conjoined and facing each other. The sleeping cat, a pictorial device depicting a curled-up cat, is employed by weavers to indicate the presence of trophy heads above the fireplace of a communal longhouse. So the brooding giant becomes an extension of the trophy head itself. The logic is simple yet profound: the warrior has taken a head, and he is now as potent as the head, for it empowers and becomes him.

However, some design does not characterize the trophy head in human terms but instead boldly exaggerates it with bulging eyes, a gaping mouth, and distended nostrils. The bulbous trophy head, almost dwarfing the torso of the giant, is the weaver's way of emphasizing its primacy. Two rows of brooding giants sit in wait and are carefully appeased with singing omen birds in the shape of chevrons on either selvedge. They are enclosed at the top and bottom with the pattern of the Tugang Ruai Langgai Tinggang, or Fallen Plumes of the Argus Pheasant, in the shape of uncolored chevron motifs. These feathers decorate the headdresses of warriors, and in offering such feathers to the brooding giant, the weaver is assuaging its ravenous spirit.

In the Saribas, where strict conventions dictate the size of spirit figures, the Gajah Meram is more restrained in its proportions and is also known as Gerasi Nabur Menua, or Giant That Sows the Earth (with seeds), and "under its arms are seeds which it guards jealously, a covert reference to a victorious warrior who proudly clutches his trophy heads under his arms after a battle."

[2] Instead of exaggerating the head of the brooding giant, Saribas weavers place the trophy heads under the outstretched arms.